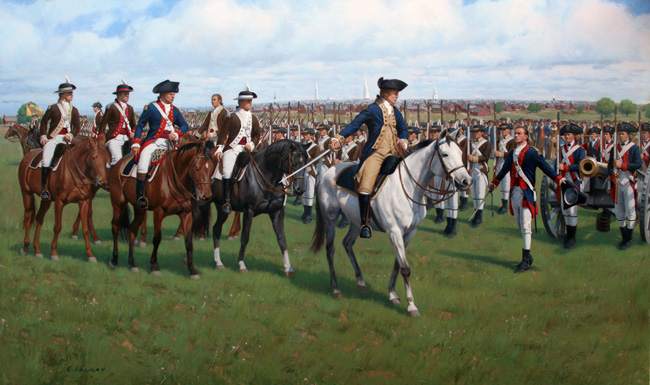 The spring of 1775 found Pennsylvania at war, and its volunteer defense force, the Military Association, or Associators, in a state of rapid expansion and a heightened training tempo. From a core of veteran organizations, dating in some cases to the foundation of Benjamin Franklin's original Military Association in 1747, the Philadelphia Associators expanded to three battalions of foot, numbered 1st, 2d, and 3d, commanded by Colonels John Dickinson, Daniel Roberdeau, and John Cadwalader, respectively. Philadelphia Merchant Samuel Mifflin commanded the artillery battalion. A rifle battalion, a troop of light horse commanded by Abraham Markoe, and a provost guard rounded out the structure. Associators, many of whom were active revolutionaries in and out of uniform, trained twice daily on the commons to the west of the city, near what is now Center Square, as crowds of spectators looked on.

In June, the Philadelphia Associators held a grand review at which a newly appointed General George Washington inspected the neatly-uniformed and well-equipped volunteers, before assuming command of the newly authorized Continental Army. With the City of Philadelphia in the background, the commander in chief passes in review, accompanied on horseback by the commanders of the 1st, 2d, and 3d Battalions of Foot and the Artillery Battalion, returning the salute of brown coated companies of foot, and blue coated artillerists with a sweep of his sword as he rides past. At far left, the Philadelphia Light Horse, also in brown coats, draws up in a column of twos, its yellow standard fluttering in the breeze. Each of the units is still active in the Pennsylvania Army National Guard. The 1s, 2d, and 3d Battalions of Foot are perpetuated by the 111th Infantry Regiment. Today’s 103d Engineer Battalion carries the lineage of the Philadelphia Artillery. Troop A, 1st Squadron, 104th Cavalry Regiment is the direct descendant of the Light Horse.