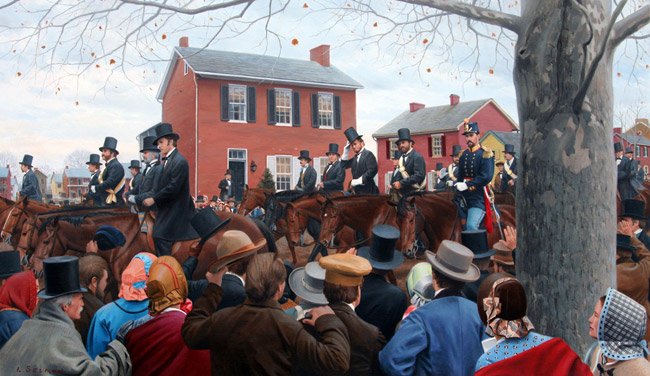 We Have Come to Dedicate

Reproductions Available
In the summer of 1863 this small southern Pennsylvania town changed forever when armies commanded by George Meade and Robert E. Lee clashed on those first three days of July.

Following the battle, the bodies of thousands of soldiers were strewn over the fields of Gettysburg. In an effort to inter the vast amounts of dead in a proper burial ground, the Soldier’s National Cemetery was established. Starting in October of 1863, northern soldiers were disinterred from the fields around Gettysburg and reinterred in the new cemetery south of town. A dedication ceremony was planned, and as a courtesy, the president of the United States was invited. To the surprise of almost everyone, Abraham Lincoln accepted, and on November 19, 1863, he delivered his immortal Gettysburg Address to a crowd of over 15,000. On the morning of that day a procession was formed in the center of Gettysburg, and the dignitaries were escorted to the ceremonies with the greatest pomp and circumstance. The day was mild and slightly overcast as the many residents and visitors lined the parade route or headed to the cemetery for the dedication. About 10 A.M. the procession began to move through town about one mile to the dedication site.

Lieutenant Cochrane of the United States Marines was stationed in Washington D.C. in November 1863, when he “received an order to accompany the Marine band to Gettysburg to take part in the ceremonies.” In the procession Cochrane recalled that “Mr. Lincoln was mounted upon a young and beautiful chestnut bay horse, the largest in the Cumberland Valley, and his towering figure surmounted by a high silk hat made the rest of us look small. The President, dressed in black, wearing white gauntlets and black crepe around his hat in memory of Willie his late son. Mr. Seward and Mr. Blair rode upon his right and Judge Usher and Marshal Lamon and myself on his left....The streets, sidewalks, steps, windows and doors were crowded with eager-eyed spectators, and flags, many of them at half-mast, were everywhere....The president rode very easily, bowing occasionally to right or left with a modest smile and uncovered head to the throng of women, men and children that greeted him from the doors and windows."

Among the eyewitnesses to the procession on Baltimore Street that day was Harvey Sweney. The 51 year old butcher and former school teacher had seen his share of hardships. Mourning the loss of his own son, who had died while in the service of his country, Sweney’s house was within the Confederate lines during the Battle of Gettysburg. Caught in the midst of a severe action between Union and Confederate sharpshooters, the brick walls of his house were perforated by bullets. On November 29, 1863, ten days following the ceremonies, Harvey took up his “feeble pen,” and wrote a lengthy letter to his brother in which he commented on a “day long to be remembered in the history of our country.”

"Early on the morning of the 19th every thing was bustle and commotion. At daylight the streets were a dense mass of living beings. Crowds were moving to Cemetery Hill and wending their way over the bloody battle grounds of the 1st, 2nd, and 3rd of July seeking for some relics of the noble dead who so valiantly stopped the tide of the rebel horde flushed with the first day’s victory and laid down their lives for their country. About nine o’clock the roll of the drum and the heavy rumble of cannon announced the preparations of the day when the loud booming of the minute guns on the Cemetery Heights gave warning of the solemn occasion. At ten o’clock the procession was formed and began to move. This was a grand and impressive sight. I have no language to depict it and tho’ the mighty mass rolled on as the waves of the mighty ocean, everything was perfect order. First came a detachment of cavalry, then the Philadelphia band, then a detachment of infantry, then the President’s body guard then the Marine band of Washington City, then the President and his cabinet all mounted, and other official dignitaries, then about two thousand infantry followed by some mounted men, then the New York Band, then the delegations of the several states in order headed by Pennsylvania with their marshals mounted on beautiful horses and handsome costumes. A living sea of human beings. But the greatest of the great men that honored this occasion was President Lincoln mounted on a beautiful bay charger between Seward and Chase. Like Saul of old he towered a head taller than any man. He sat gracefully bowing with a modest smile and uncovered head to the throng of women, men and children that greeted him from the doors and windows. His modest appearance and dignified manners, to say nothing of the noble speeches he made here, has endeared him to the hearts of the people and added thousands of friends to him on that day. But tho’ he looked cheerful and happy on that day an observant eye could see that the dreadful responsibility that this nation and this wicked rebellion has cast upon him has had its marked effect, and that he feels the terrible responsibility that rests upon him."