100 Artist Proofs Signed by Medal of Honor Recipient SSgt. Clint Romesha, Major Aaron Dove and the artist and includes a Open Edition Black and White of The Lone and the Brave signed by Major Mike Polidor, Aaron Dive and the Artist

COP Keating was constructed at the bottom of a deep bowl in Kamdesh, Nuristan Province, Afghanistan. Surrounded by high ground and along a river, the outpost had only partial overwatch protection from a nearby Observation Post.

In 2009, fifty-four Soldiers assigned to Bravo Troop, 3rd Squadron, 61st Cavalry deployed to COP Keating to conduct counterinsurgency missions. However, the "Black Knight Troop" performed mostly base defense due to their meager numbers. Throughout Bravo Troop’s tour at COP Keating, the enemy conducted nearly fifty probing attacks – using each to study the unit’s TTPs and base defenses. By mid-2009, the chain of command determined COP Keating had no tactical or strategic value. The camp was scheduled for closure in late - July 2009. The closure was delayed by brigade operations elsewhere in support of Afghan forces. These operations diverted vital backhaul equipment and intelligence assets away from Keating.

Just before 6 a.m. on October 3rd, 2009, approximately 300 enemy fighters attacked from the high ground above, pinning down the outpost’s six primary fighting positions from a 360-degree vantage. The camp’s primary fire support was immediately suppressed. The Afghan soldiers guarding the eastern side of the camp fled their positions and the enemy immediately executed - or took them hostage. About 45 minutes after the attack was launched, the command post transmitted, "Enemy in the wire!" - COP Keating was breached at three points and the enemy set fire to many of the camp’s plywood buildings. After emplacing Claymores for a final stand, Bravo Troop withdrew to a tight perimeter inside of buildings and a HMMWV – an area they had previously named, “The Alamo”. About one hour into the attack, AH-64 Apache helicopters arrived and provided supporting fire.

Shortly thereafter, US Air Force A-10s, F-15s, and a B-1 bomber dropped dozens of munitions – virtually each strike was at danger-close range. Aided by continuous air support, Soldiers manning the OP reestablished control of their mortar pit and provided indirect fire support. The Troopers inside "The Alamo" quickly regrouped, formulated a hasty plan, and fought back. Seizing the initiative, they burst from the buildings and HMMWV and killed at least four enemy fighters who had breached the perimeter. They continued to fight under concentrated and unremitting fire from recoilless rifles, RPGs, anti-aircraft machine guns, mortars and small arms. After more than 14 hours, and with continuous close air support, the Troopers regained control of the camp’s key buildings and neutralized enemy firing positions in the nearby village.

As evening fell, the call went out, "Keating reports negative contact." Over 150 enemy fighters lay dead and COP Keating was again under US control. Twenty-Two Soldiers were wounded - all but three returned to duty following the battle. Eight Americans made the ultimate sacrifice defending their fellow Soldiers and their outpost - their comrades recovered each of the eight who fell. The Veterans of the Battle of COP Keating were decorated with the following awards for their actions during battle: two Medals of Honor; twenty-seven Purple Hearts; nine Silver Stars; eighteen Bronze Stars with "V" device; three Bronze Star Medals; and thirty-seven Army Commendation Medals with "V" device.

Six Army and two Air Force Aviators were decorated with the Distinguished Flying Cross Medal for their support to the ground troops – one of whom joins us today. The class gift is titled, "The Warrior Ethos" – to memorialize the 15th anniversary of the Global War on Terrorism - and is dedicated to those who fought the Battle of COP Keating. For it was they who fought selflessly for their comrades, defied defeat, refused to quit, and are now examples for everyone who serves.

Staff Sergeant Clinton L. Romesha distinguished himself by acts of gallantry and intrepidity at the risk of his life above and beyond the call of duty while serving as a Section Leader with Bravo Troop, 3d Squadron, 61st Cavalry Regiment, 4th Brigade Combat Team, 4th Infantry Division, during combat operations against an armed enemy at Combat Outpost Keating, Kamdesh District, Nuristan Province, Afghanistan on October 3, 2009. On that morning, Staff Sergeant Romesha and his comrades awakened to an attack by an estimated 300 enemy fighters occupying the high ground on all four sides of the complex, employing concentrated fire from recoilless rifles, rocket propelled grenades, anti-aircraft machine guns, mortars and small arms fire. Staff Sergeant Romesha moved uncovered under intense enemy fire to conduct a reconnaissance of the battlefield and seek reinforcements from the barracks before returning to action with the support of an assistant gunner. Staff Sergeant Romesha took out an enemy machine gun team and, while engaging a second, the generator he was using for cover was struck by a rocket-propelled grenade, inflicting him with shrapnel wounds.

Undeterred by his injuries, Staff Sergeant Romesha continued to fight and upon the arrival of another soldier to aid him and the assistant gunner, he again rushed through the exposed avenue to assemble additional soldiers. Staff Sergeant Romesha then mobilized a five-man team and returned to the fight equipped with a sniper rifle. With complete disregard for his own safety, Staff Sergeant Romesha continually exposed himself to heavy enemy fire, as he moved confidently about the battlefield engaging and destroying multiple enemy targets, including three Taliban fighters who had breached the combat outpost’s perimeter.

While orchestrating a successful plan to secure and reinforce key points of the battlefield, Staff Sergeant Romesha maintained radio communication with the tactical operations center. As the enemy forces attacked with even greater ferocity, unleashing a barrage of rocket-propelled grenades and recoilless rifle rounds, Staff Sergeant Romesha identified the point of attack and directed air support to destroy over 30 enemy fighters. After receiving reports that seriously injured Soldiers were at a distant battle position, Staff Sergeant Romesha and his team provided covering fire to allow the injured Soldiers to safely reach the aid station. Upon receipt of orders to proceed to the next objective, his team pushed forward 100 meters under overwhelming enemy fire to recover and prevent the enemy fighters from taking the bodies of their fallen comrades.

Staff Sergeant Romesha’s heroic actions throughout the day-long battle were critical in suppressing an enemy that had far greater numbers. His extraordinary efforts gave Bravo Troop the opportunity to regroup, reorganize and prepare for the counterattack that allowed the Troop to account for its personnel and secure Combat Outpost Keating. Staff Sergeant Romesha’s discipline and extraordinary heroism above and beyond the call of duty reflect great credit upon himself, Bravo Troop, 3d Squadron, 61st Cavalry Regiment, 4th Brigade Combat Team, 4th Infantry Division and the United States Army. 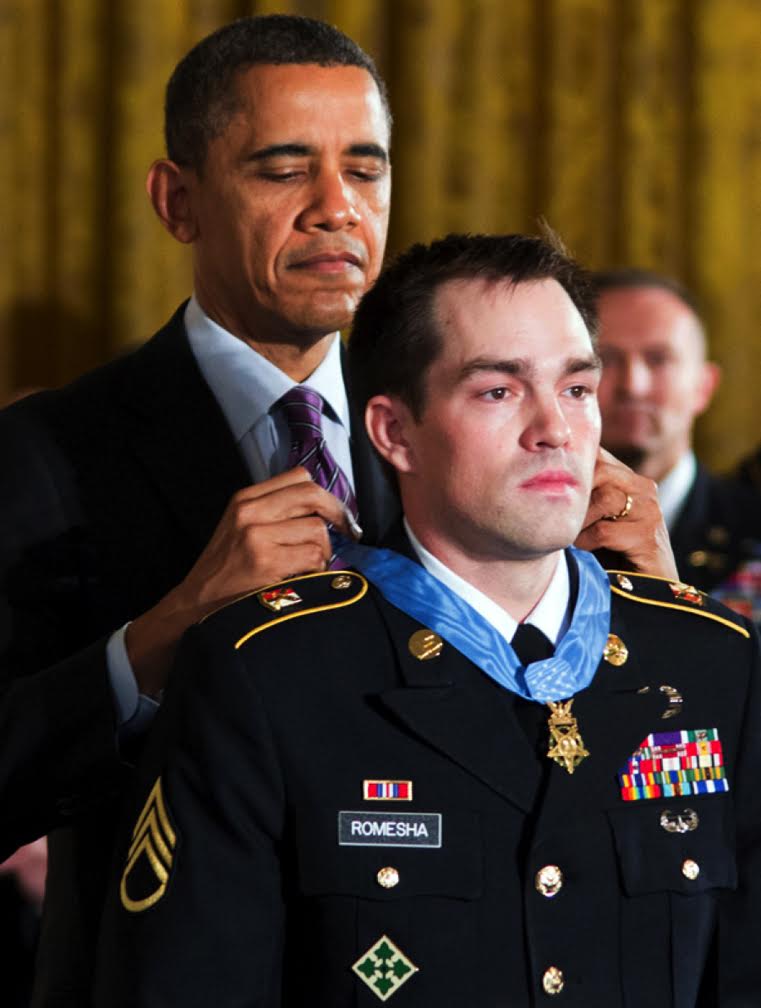